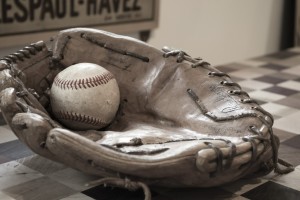 “Son, you’re not going to catch the ball if you keep looking the other way and ducking.”

I was getting frustrated the other day that one of my boys, who has just started playing Little League baseball, was not picking up on this concept of actually catching the ball instead of being hit by it. You would think that pain is a great educator but all it was doing was teaching him how to more effectively dodge the ball.

“Son last I heard there are no dodgeball players signing multimillion dollar contracts to play for the Yankees.” (Yea, I’m super dad).

I try hard of course not to be one of “those” types of parents so frankly I could care less if he plays for anything other than just fun, but I was really hoping he would at least try to catch it the way I was telling him too. It was about this time that my mom reminded me that there was a point in time where I did not catch so well.

“SAY WHAT WOMAN!?” Being that I was a star pitcher in Little League for a couple of seasons I guess made me a little sensitive.

“Don’t you remember me forcing you sit in front of our front door and throw a tennis ball against it and catch it for hours?” Asked my mom as she watched my frustration grow.

Nothing like being reminded of your own shortcomings but it did help me to understand that any new habit takes hold only through consistent repetition and that takes concentration and effort (Arnold 75).

Caroline Arnold addresses this in her book Small Move, Big Change. She believes that micro resolutions are the key to accomplishing any goal, and I agree. But there are a few key habits that are force multipliers. Mastering these makes many other areas in our lives more successful and fulfilling.

Sleep: whatever self-improvement objectives drive your interest, getting more rest will boost your efforts to improve the quality of your life in ways you cannot imagine (Arnold 76).

Many of us, wrongly I might add, pride ourselves on getting only a little amount of sleep but being able to still work. I’m not sure when this became a way to achieve popularity in the workplace but the fact is, we all need enough sleep. Yet almost 3/4 of all adults in the United States get less than six hours of sleep a night (Arnold 77). The average adult needs at least seven hours per night. I know, I know, you are already saying to yourself that you don’t need that much. But you do. How would you like it if you stepped on an airplane and your pilot was bragging about only getting a few hours of sleep? Yeah, didn’t think so.

My wife and I are living proof today that a good night sleep is required for a good day of productivity. Neither of us slept very well last night due to some naughty kitties knocking things over in the dark, an insomniac child and other variables. As a result neither one of us were very productive today. We went through our day like the zombie apocalypse, failing to articulate very well and definitely not getting as much done as we need to.

Another force multiplier habit is Fitness.

A recent article in the New York Times reported that people who sit too much our shaving years off of their lives (I say this as I sit in front of my computer). (Arnold 92)

When many of us think of fitness we combine it with the word “diet” but I recently made a wonderful discovery. For years I had used fitness as a way to keep my weight down while still eating (and drinking) whatever I wanted to. But Father Time catches up with all of us and for the past couple of years there just wasn’t enough time in the day to burn enough calories to offset my intake. I recently completed the Slimgenics program and I learned that when I can control my diet without relying on exercise to offset my caloric intake. I can exercise for fitness rather than weight loss, which when you are dieting properly is a force multiplier.

This also helped reduce my overall stress as I occasionally, due to travel or other commitments, must miss a workout.

If you were only given one automobile for your entire life you would probably take wonderful care of it knowing that is your only form of transportation. Your body is the same way. Yet, while all of us know the importance of fitness, very few of us stick to the program.

The power of the micro resolution can get you back on the fitness track and keep you there. I remember years ago when I had fallen off the fitness wagon and landed hard on my ever widening midsection. I heard that Herschel Walker built himself up by doing push-ups and situps every morning. So I made the commitment to get up and do 10 push-ups and 10 situps. Within a few weeks I was up to 100+ push-ups and 100+ situps. But then I made a critical mistake. Those 100+ numbers became my new benchmark and pretty soon I did not want to get out of bed. The goal here is to set a minimum level, and if you do more then that’s fine. But take a long time before raising that minimum.

Make it easier on yourself to be physically fit. Personally, I hate going to the gym but I love watching my favorite movies while I work out at home. So I have set up my fitness routine to also be my mental relaxation time and working out is something I look forward to so I can see my old movies (re-watching Band of Brothers this week).

Also, give yourself small goals to begin with. If you’ve not worked out since Clinton was in office don’t suddenly start out by setting the goal to work out five days a week. Start out with one or two days and work your way up (Arnold 100).

In the spirit of micro resolutions I encourage you to add just two this month: getting more sleep (giving yourself a trigger to go to bed at a certain time) and adding some fitness into your weekly schedule.

One Response to Catching Success