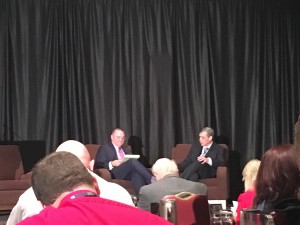 Many who attended this year’s Aviation Security Summit were disappointed that industry leadership unfortunately did not get the opportunity to meet with the new TSA administrator, Peter Neffenger. According to his representatives, he has had a heavy travel schedule and was feeling under the weather. Particularly unfortunate because his first exposure to the airport security industry in October, was at the ACI Safety and Security conference, where he was ready to talk about screening failures, but he was not fully briefed on issues such as employee inspections, and security directives related to credentialing, which are more relevant to airport security managers.

TSA’s chief risk officer Ken Fletcher filled in for the Administrator on a last-minute notice. Ken did an exceptional job, but while new security directives are already in the pipeline, we really don’t know what TSA Administrator thinks about them. Fletcher did affirm the TSA is not retreating from risk-based security, which was a concern after the screening failures highlighted in leaked red team report in June. He noted that the goal is to get to 25 million PreCheck members, and to stay focused on security, and less on operational efficiency at the checkpoint.

The insider threat remains a primary topic of discussion. Fletcher noted that 100% employee screening is not the panacea to a very complex problem, as promoted by certain policy makers. The TSA rolled out an Information Circular related to employee inspections, this summer, which highlighted some best practices and recommendations from the ASAC working group.

While Information Circulars are advisory in nature only, many TSA inspectors throughout the US pressured Airport Security Coordinators to not only implement the procedures, but also include them in their Airport Security Program, which makes them regulatory, and enforceable. Fletcher noted that many airports have stepped up to implement the procedures and the rest need to get on board. He also emphasized that what works at one airport in terms of employee inspections, may not work at another airport so the specific procedures and policies must be flexible.

While individuals such as Fletcher clearly understand that when you’ve see one airport, you’ve seen one airport, the message is not always being received at the field level to the TSA inspectors, Federal Security Directors and assistant FSDs. Special note to ASCs – if you have a great relationship with your TSA regulatory personnel, and you’re truly working together to implement higher security measures, then you have something to be thankful about this holiday season.

Look for a Security Directive to come out soon that will require some form of employee inspections.